Karen and her friends

I love it when people ask me what I do as a missionary in Costa Rica! As an unabashed story-teller, I have accrued hundreds of tales of interesting things I 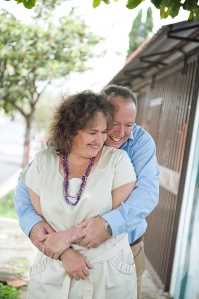 have done in the last 13 years, and will happily keep any audience laughing and crying over the joys and heartbreaks of my ministry. The hard part is when I have to come up with the Reader’s Digest version, in order to explain: What precisely DO I do?

In very general terms, I become involved in the lives of the people around me in whichever way I can serve as God’s hands and feet in this imperfect world. I am learning that the emphasis must be on the people around me, not on the tasks. For example, there’s Marta. She ministers in the local women’s prison. She was so energized by my Inductive Bible Study course that she wanted others to hear. And so she called on Wednesday to ask if I would be willing to show her co-workers how to study the Bible properly. And would I be able to start on Saturday morning?

Where I grew up, we learned to focus on our tasks. I liked to measure progress by how many items I could check off my “Things to Do” list, and was especially pleased if the jobs were easily measurable. Yes, I did finish all the ironing. What a great sense of accomplishment to cross that off! The longer I spend in missions, the more I see that the most significant things we do to serve others often don’t make it to a list, and if they did, they could almost never be checked off. For example, when a friend shows up unexpectedly at the door with chest pain, I jump into the taxi to go to the hospital with her, and we return home hours later with a provisional diagnosis and instructions for further testing. No time to write down “help Sally because she thinks she’s having a heart attack,” and even if I’d written it down, how would I know when the job was completed? After the trip to the hospital? After a follow-up phone call about the test results? A month later when we were still trying to figure out how to lighten the load of stress that was causing the pain? A year later when the pain changes to a different kind of pain?

Instead of “tasks” I’ve started thinking of my list in terms of people. For instance, there’s a long list of people around the world who have at some point been deeply involved in my life, and I in theirs, yet now we live far apart; it’s hard to stay connected over long distances and long periods of time. We want to, but we just don’t have the time it takes to share all the details and we have different responsibilities for now; we have to be content with the short visits God provides us together from time to time. So, to those of you who are reading this now, please know that I love and miss you just as much as ever, and I eagerly look forward to an eternity together without the constraints of time and distance!

At the other end of the spectrum is the list of people that God has put in my life now in Costa Rica. I couldn’t begin to imagine what will come up in the next few months as become more involved in their lives. But if you’d like to hear some stories about the LAST few months, just read on! Maria (all names have been changed): This is one of the students in the classes I teach at ESEPA seminary.

Maria is about 60 years old, graduated from elementary school, has never before spoken in public, and wants to learn about the Bible. She doesn’t know what I mean when I ask her to write an “outline,” and is way outside her comfort zone to take classes in the Certificate of Women’s Ministry program. Here she is being challenged to begin a planned program to read through the Bible in a year, and she convinces her husband to do it with her. She has passed all 8 courses so far, and expects to finish the program early in December, in time to graduate with all the other students from ESEPA. She wants to get together with me beginning in January to keep practicing the inductive Bible study skills she learned in class.

Laura: This is another of my students who lives about a 5-hour bus ride away. At 4 months pregnant, every week she leaves her 2-year-old with her husband the day before class, takes the public bus into San Jose, spends the night in someone’s guest room, goes to class the next day, and in the afternoon returns home by bus. She missed one week when she was very ill, so we made up the work after class the next week. But other than that, she has doggedly kept up with the schedule, her homework, and her family, because she is determined to graduate with the class. I was able to help her keep up after her missed class, so that she could pass the course and graduate on time.

Mau: This student came up to me the last week of my class Inductive Bible Study, nearly in tears. She said that she’d been praying for years for God to let her learn how to study the Bible for herself. Here was the last class, and she knew she had far to go in getting the skills down. She couldn’t bear to think that her opportunity was over, and she still wouldn’t be able to study the Bible on her own. When I offered to get together with her and the other students as often as they needed, they all wanted to sign up.

Elena: This young woman showed up on our doorstep in February, led there by God, looking for help. Over the months that help has taken many different forms and has usually been unexpected: a late-night emergency room visit, creating business cards for a new business, cooking lessons, crying together, laughing together, cleaning the house, a bed for a night, seminary classes, hugs, reprimands, visiting her church, Bible study, prayer, food, budgeting lessons, and connecting her to godly Costa Rican women.

The Honduras team: several months ago I was asked to run a retreat for the Missionary Kids (MKs). When it seemed an impossible task to find the people and resources to do that, I remembered a new friend that God had recently brought into my life during our home assignment. When I got in touch with her, she and her family were excited to be able to be involved. Two other new friends also came to help us, along with our daughter Vikky. As I write this, we are in a fellow missionary’s home preparing for the drive up to the retreat center tomorrow. God has brought me back into contact with missionary friends from some years ago, and it looks like He might have some long-term plans for us to work together (somehow!) on MK ministries. I know that there are more missionary friends who I’ll see at the retreat, more sharing sessions over meals, more late nights sharing what God has done, is doing, will do. More chances to encourage each other to hang in there, trust God’s plan even when it doesn’t match our plan. We will all leave enriched, strengthened, glowing with the memory of being in the presence of God while He worked miracles in the lives of someone else. Even better, filled with the humbled joy that comes from being the arms and feet that God chose to use while doing His work. And with a renewed hunger to always be nearby to watch while He works His miracles.